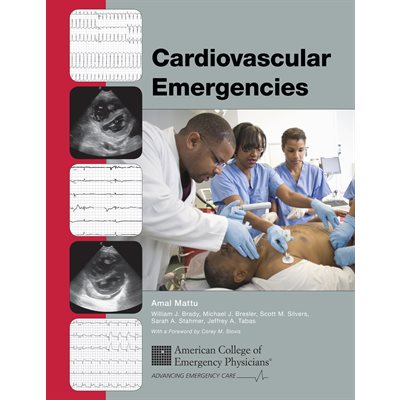 Cardiovascular Emergencies facilitates the efficient delivery of care to patients who present with acute cardiovascular conditions. With more than 6 million people presented to U.S. emergency departments every year with chest pain, emergency physicians have the difficult task of differentiating life-threatening causes from more benign ones.

And beyond chest pain, emergency physicians care for patients with other forms of cardiac disease — arrhythmias, infections, cardiovascular complications from other conditions, and they must be able to identify these conditions, assess their severity, and provide immediate, often lifesaving, interventions in the less-than-ideal conditions of a busy ED.

If you’re requesting a review copy of this book, please include your name, address, designation, link for your website or social media, and the publication for which you are a reviewer. We may provide print book or eBook promo code if available for the review.


Amal Mattu, MD, FACEP. Since joining the faculty at the University of Maryland School of Medicine in 1996, Dr. Mattu has had a passion for teaching and writing about emergency cardiology. His commitment to teaching has earned him more than twenty teaching awards, including national awards from the American College of Emergency Physicians (ACEP) and local honors including the Teacher of the Year for the University of Maryland at Baltimore campus and the Maryland State Emergency Physician of the Year Award. He is a regular speaker at national and international conferences on topics pertaining to emergency cardiology. Dr. Mattu has authored or edited 16 textbooks in emergency medicine, including seven focused on emergency cardiology and electrocardiography. He is also the only emergency physician to serve as primary Guest Editor for Cardiology Clinics, which he has done twice. Dr. Mattu is currently a tenured professor, Vice Chair, and director of the Emergency Cardiology Fellowship for the Department of Emergency Medicine at the University of Maryland School of Medicine.


William J. Brady, MD, FACEP. Dr. Brady is a tenured professor of emergency medicine and internal medicine at the University of Virginia School of Medicine and is a senator in the Faculty Senate of the University of Virginia. He is the chief medical officer and medical director of Allianz Global Assistance (United States and Canada). He lectures locally, regionally, nationally, and internationally on many topics, including the electrocardiogram, cardiac arrest resuscitation, acute coronary syndrome, and emergency preparedness and response. He is a member of the Academy of Distinguished Educators at the University of Virginia and has received numerous teaching awards, including ACEP’s National Faculty Teaching Award, the University of Virginia School of Medicine Dean’s Award for Excellence in Teaching, and the David A. Harrison Distinguished Educator Award. He has also published numerous scholarly works, written or edited multiple textbooks, and contributed to clinical policy guidelines for both ACEP and the American Heart Association.

Michael Jay Bresler, MD, FACEP. Dr. Bresler is a clinical professor in the Division of Emergency Medicine of the Stanford University School of Medicine. Well known as an educator, he is frequently invited to lecture throughout the United States and internationally. His publications in the medical literature include a number of textbooks, textbook chapters, and peer reviewed journal articles. Dr. Bresler has been quite active in the legislative process at both the state and federal levels. He has written portions of both Federal and California anti-dumping laws, as well as legislation that generates over $200 million annually in California for the emergency care of indigent patients. Dr. Bresler has won the highest awards for leadership from both ACEP and the California chapter of ACEP. He served for a number of years as Speaker of the National Council of ACEP, and before that as President of the California chapter. ACEP has honored Dr. Bresler as a Life Fellow of the College, an Honorary Member, and a Hero of Emergency Medicine.

Scott Silvers, MD, FACEP. Dr. Silvers attended medical school at the University of Rochester School of Medicine in Rochester, New York, and received his training in emergency medicine at the Harvard Affiliated Emergency Residency in Boston, Massachusetts. Currently, he is chair of the Department of Emergency Medicine at Mayo Clinic in Jacksonville, Florida, where he also serves as co-director of the Mayo Clinic Comprehensive Stroke Center and Chest Pain Center. Dr. Silvers is a member of both the ACEP Clinical Policies Committee as well as the American Heart Association’s Emergency Cardiovascular Care Committee where he contributes to the development of national, evidence-based guidelines. He was a co-author of the first Blueprints in Emergency Medicine study guide, and a co-editor of the Textbook of Emergency Cardiovascular Care and CPR. In coordination with the University of Miami’s Center for Research in Medical Education, Dr. Silvers contributed to the development of the national advanced stroke life support curriculum. He is a reviewer for several journals and a member of the editorial board of Emergency Medicine Practice.

Sarah A. Stahmer, MD. Dr. Stahmer is an associate professor of emergency medicine at the University of North Carolina, Chapel Hill. She has been a program training director in emergency medicine for 15 years, building the academic training programs at Hospital of the University of Pennsylvania, Cooper/RWJ University Hospital, and Duke University Hospital. Her academic interests are ultrasound in emergency medicine, cardiovascular emergencies, and medical education. She has lectured extensively on these and other topics regionally, nationally, and internationally. She has received numerous awards for leadership and teaching in medical education that include the 2013 Council of Residency Directors Michael Wainscott Award for leadership and teaching in residency education, the Socrates Teaching Award UNC Emergency Medicine Residency, and the Council of Residency Directors Impact Award. Her publications are numerous in the fields of medical education, ultrasound, and cardiac emergencies.

Jeffrey A. Tabas, MD, FACEP. Dr. Tabas is a professor of emergency medicine at the University of California San Francisco School of Medicine and practices at San Francisco General Hospital. He received degrees from Brown University and University of Pennsylvania School of Medicine and completed both internal medicine and emergency medicine residencies at University of California Los Angeles Medical Center. Dr. Tabas has worked with ACEP to teach emergency medicine, advanced procedural skills, and cardiovascular emergencies to a generation of students, residents, and physicians. He has been an active lecturer, author, and editor as well as course chair for ACEP Scientific Assembly and other popular emergency medicine conferences. When not pursuing clinical or academic activities, he is busy spending time with his wife and three children as well as pursuing his interest in sports, especially throwing hip checks in his ice hockey league for minimally skilled adult players.

Chapter 2. The Electrocardiogram in the Evaluation and Management of Acute Coronary Syndrome

Chapter 20. Use of Emergency Department Observation Units for Cardiac Patients

Chapter 21. Reducing the Risk of Malpractice

You may already have several ECG, pharmacology, and critical care books with cardiac chapters, and you may think you do not need any more. You should think again.”
—Doug Franzen, MD, MEd, University of Washington